Custom CMS block displayed at the left sidebar on the Catalog Page. Put your own content here: text, html, images, media... whatever you like. 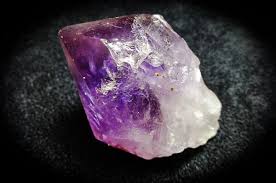 Amethyst is a purple variety of quartz often used as an ornamental stone in jewelry. Traditionally included in the “cardinal” or most valuable, gemstones (along with diamond, sapphire, ruby, and emerald), Amethyst has lost some of its value today due to the discovery of extensive deposits in locations such as Brazil.

The name “Amethyst” comes from the Ancient Greek a- (“not”) and amethysts (“intoxicated”), a reference to the belief that the stone protects its owner from drunkenness; the ancient Greeks and Romans wore amethyst stone and made drinking vessels of it in the belief that it would prevent intoxication.

Amethyst Crystal is produced in abundance in Brazil where it occurs in large geodes within volcanic rocks. It is also found and mined in South Korea. The largest opencast amethyst stone vein in the world is in Maissau, Lower Austria. Much of the finer quality comes from Russia, and one of the largest global producers is Zambia with an annual production of about 1,000 tones each year.

Many people believe that Amethyst Crystals offer special healing powers. Leonardo da Vinci wrote that the gem dissipates evil thoughts and quickens the intelligence, high praise indeed. It was also believed to encourage celibacy and rings made of amethyst stone are often worn by bishops.

Similarly, Tibetan Buddhists believe the crystal to be sacred to the Buddha. Amethyst is believed to be a spiritual crystal that can quicken spiritual growth and inspires healing powers, divine love, and intuition.

As a healing crystal amethyst is considered to be an uplifting crystal that may strengthen both the endocrine and immune systems. This gemstone is also believed to aid the pituitary gland and is supposedly a powerful blood cleanser and energizer.

Chinese people involved in court cases have been known to rent Amethyst Stone in the belief that the stone helps to ensure justice. Amethyst was used as a gemstone by the ancient Egyptians and was largely employed in antiquity for intaglios.

Many people believe that the Crystal helps relieve headaches by rubbing gently on the temples and this is also said to induce sleep. Amethyst Stone was also reputed to control evil thoughts, increase intelligence, and render men shrewd in business matters.

For travelers, it was worn as a protection from treachery and surprise attacks, kept soldiers from harm, and gave them victory over their enemies. It lent assistance to hunters in the capture of wild beasts and fowl and was considered to be a powerful psychic stone of protection against witchcraft and black magic.

Like other royal stones, it protected its wearer from disease and contagion.

In the most prominent benefits of Amethyst Crystal, it is considered to be an open sesame to liberate one from the habit of drinking alcohol. Even, its name which is a Greek word defines the same, according to some beliefs.

Other than the addiction of alcohol, it is also considered to help one get rid of all other possible addictions, which drive one to the wrong end of the life, such as drug usage, homesickness, etc.

It is considered to be an equally effective healing tool for problems related to sleeping, hearing, breathing, headache, and body pain.

It is also considered to bring a state of mental balance, calmness and stability, which helps one to have a good and peaceful sleep. It also lowers down the impact of mental disorders and psychic attacks on its wearer. It elevates energy levels, which helps one to live life to the fullest.

Also, it helps one to move ahead of the depressing times and situations. One grows as a person and gains honesty, modesty, and integrity. One does not easily fall for seduction or other’s influence in the presence of Amethyst stone. It is an effective remedial tool for protecting one from poison and other poisonous substances.

How to Clean the Amethyst Crystal?

1. The most accurate cleaning method is to keep a day of burying the stone in a dry land.

2. If you use a porous amethyst Crystal, leave it in water for 1 day and clean it.

All these crystals are 100% original and natural. Nature imprints its contours on its creation so be happy to accept crack marks, holes and color variations in your collection. This assures that its 100% natural and Authentic.

Information provided is learnt from experience of various healers to help healers/ believers. This is any case is not any alternative to medical advice.

Use of the product is the personal choice of the user and the result cannot be guaranteed.